I recently found this link on 9gag about breakfasts from all around the world. While it might be slightly misinformed about a few things, it’s still fun to see some typical dishes from around the world, and it got me thinking about Colombia and its love of soup.

When I arrived to Colombia I asked my temporary host what foods were popular here. One of her answers was soup. Soup? I thought. Surely every country likes soup?

How naive I was. Colombians love soup like nothing else on earth, aside from maybe arepas. Lucky for me, their soups are delicious.

Colombian soups generally operate on a kind of ‘more is more’ philosophy, which is to say that if they feel their chicken soup is lacking something, they’ll add beef, pork and potatoes, rather than search for a complimentary herb. Hey, works for me.

Here’s 5 Colombian soups and what’s in them:

Ajiaco is extremely popular in the Andes region, and you’re sure to encounter it if you travel to Bogota. Typical ingredients include chicken, onion, potatoes, corn on the cob and avacado, with guasca seasoning. 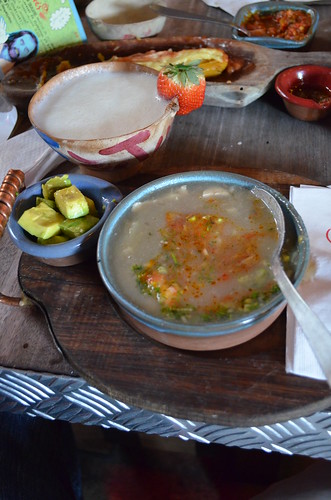 Sancocho is a soup popular all over Latin America, but with variations in each country. In Colombia Sancocho is made with (m)any type(s) of meat and pieces of plantain, potato and yuca. It comes with a plate of rice on the side which is often thrown into the mix too.

Popular more or less all over Colombia, Mondongo is a favourite and a national staple. In Mondongo you’ll find intestines, beef, pork and potatoes. Doesn’t sound appetising? In addition many herbs and spices are added which makes it one of the most flavoursome soups in the country.

A personal favourite (and not just because of the hangover-friendliness), the caldo de costilla originates from the Andes region and can be found in all good restaurants. Absolutely filling and very tasty, this soup contains ribs, potato, garlic, onion and cilantro leaves. 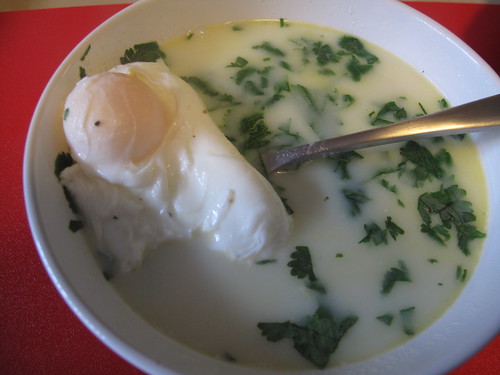 An extremely filling breakfast, the changua is very popular in Boyaca and in Bogota. It’s a mixture of water and milk with an egg on top. Often a piece of stale bread is placed in the soup for added peculiarity. Not one I was particularly looking forward to trying but, hey, it did the job.

Of course, it doesn’t end there. There’s a veritble plethora of soupy delights waiting for you to try next time you travel to Colombia.

Paul is an Englishman with a longstanding love of travel, tea and quality beer. His first trip was to Bosnia & Herzegovina and it was there, wading in some waterfalls near Mostar with just a litre of cheap beer and some bread in his belly, that he was bitten by the travel bug. After many more trips and a spell working in London, Paul relocated to Buenos Aires for some months before moving to Colombia. He's been here, knocking back 'guaro', for about 2 years now. More posts from Paul Fowler